The Dispersion of Asbestos from Asbestos-containing Building Materials

A Struggle of a Mother

The Dispersion of Asbestos from Asbestos-containing Building Materials

The national and local governments are fairly specific about the procedures to be followed in the demolition of buildings in which sprayed asbestos sprayed is involved (i.e., asbestos should be removed before the demolition work), but remain virtually silent about the removal of asbestos-containing building materials, which are much wider in use than sprayed asbestos. Measures to prevent the dispersion of asbestos from asbestos-containing building materials are urgently needed, especially in the quake-damaged area.

A Struggle of a Mother

Naoko Yoshida, a mother of a junior high school student and one of coordinators for the new Network, worked hard in vain to have such measures implemented in the demolition of a large collapsed condominium just adjacent to the junior high school where her son is enrolled. She checked the blueprints and specifications of the condominium and found that, although no asbestos was sprayed, asbestos-containing floor tiles and asbestos boards were in use. She asked the demolition company to enclose the condominium over its height and remove asbestos-containing building materials before demolition. But the company said that it was impossible to comply with her request.

In April the demolition work started. The three sides of the condominium were enclosed by a tall fence, but the remaining side facing the school was covered by a lower fence and was almost open; the company explained to her that they could not set up a high fence on the side facing the school because they must secure a waste storage yard on that side of the condominium. As the demolition work went underway, dust was scattered over the low fence into the school's compound(Fig.8). In response to her request, the City of Kobe measured airborne asbestos concentrations during the demolition; and the counts were 2.5 fibers per liter of air sampled from a location near the demolition site and 0.7 fibers in the school's playground. Although these counts are 7 to 25 times as high as that in Tokyo, Kobe city officials told her that they could not instruct the company to adopt better asbestos dispersion prevention measures. 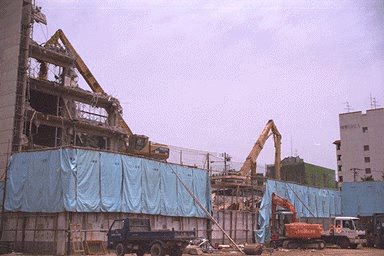 On July 1, a housewife in Ashiya City called the asbestos hot-line. She was afraid that a big collapsed condominium near her own condominium might have sprayed asbestos in it; and she also told that a meeting for explanations of the demolition work was to be held in a few hours. A member of ASNET attended the meeting, where representatives of the demolition company, with much experience in demolition and equipped with its own asbestos disposal facility, told her that absolutely no asbestos, not only sprayed asbestos but also asbestos-containing building materials, were used in the condominium soon to be demolished. However, the member of ASNET found in the condominium many floor tiles containing asbestos and asbestos cement sheetings.

To add in passing, after the demolition company pledged to remove the asbestos-containing building materials, the head of the Hyogo Prefectural Government's Air-Pollution Section, who was also present, told the meeting that it was not necessary to remove asbestos-containing building materials before demolition and that airborne asbestos in the Earthquake-damaged area was at a safe level, so on, so forth. What a nonsense to be uttered by the official whose duty it is to safeguard the residents of Hyogo Prefecture from air pollution!

Although the amount of asbestos imported into Japan has continued to decrease since 1988, Japan is still importing approximately 200,000 tons of asbestos a year (as of 1994), and is using 15 times as much asbestos per head as in the United States. The number of persons victimized by pleural mesothelioma has tripled over the past 10 years (Fig. 9). Crocidolite and amosite was banned in April 1995 because of their carcinogenicity, but chrysotile, which is also carcinogenic, remains to be used.

The Earthquake has revealed beyond doubt that "controlled use of asbestos" is impracticable, because no one can "control" the dispersion of asbestos in an area hit by a serious earthquake. Many workers are engaged in demolition and repair of buildings in the Hanshin area without wearing masks and are exposed to high concentrations of asbestos. Residents are exposed to airborne asbestos with concentrations more than 10 times as high as those in Tokyo. Even if they wear dust-masks outdoors, airborne asbestos fibers steal into their houses and offices. Do they have to wear dust-masks indoors, too? A situation in which people must wear dust-masks on a regular basis is quite abnormal. The cover of a booklet on asbestos published several years ago by the Japan Consumers' Union had a cartoon of schoolchildren on their way to school, all wearing dust-masks. The alarm has now become a reality in Kobe!

Who have brought about this horrible reality? Manufacturers of asbestos-containing materials, most responsible for the situation, continue to manufacture asbestos-containing building materials, and moreover they are now enjoying a new lucrative market for asbestos cement roof shingles in the quake-damaged area. Although a majority of houses in the pre-earthquake Hanshin area were roofed with tiles, many of the new houses now being built are roofed with asbestos cement shingles -- because of a misleading propaganda that houses roofed with tiles crumbled readily under the heavy weight of the tiles when they were shaken by the Earthquake. The manufacturers emphasize the lightness of asbestos cement shingles, but remain silent about the fact that the shingles contain asbestos, a deadly material. Although the City of Kobe has announced a policy to encourage the use of asbestos-free building materials, the policy is not put into effect.

The situation in the Hanshin area has proposed new asbestos problems: in any locality across Japan where serious earthquakes can take place once in a while, sprayed asbestos in buildings should be identified and removed as soon as possible before the locality is hit by a serious earthquake, dust-masks should be stocked, and asbestos-containing products of all kinds should be banned. We will continue to make our best efforts toward that end.

Authors are indebted to Mr. Fumiaki Moriya for his comments and suggestions for improvements of the earlier draft.