The Establishment of Hanshin ASNET

Dissemination of Information on Asbestos

Works for the Implementation of Measures to Contain Asbestos Dispersion

The Establishment of Hanshin ASNET

In February volunteer groups in Nagata Ward, Kobe City, began to distribute residents and schoolchildren masks, together with a leaflet telling about the danger of asbestos under the stimulating headlines: "Are Your Children Safe?" They also collaborated with staff members of a public health center in the area, and asked drug stores, convenience stores, etc., to keep dust masks on their shelves. The ASNET also began distributing dust-masks in March. These activities were reported by the media, and many residents and volunteers in the Hanshin area began to be concerned about the danger of asbestos. On March 25, a new network named "The Network for Improving the Measures to Counter Asbestos in the Earthquake-damaged Area (Hanshin ASNET)" was established.

In collaboration with the ASNET, Hanshin ASNET is concentrating its efforts primarily in three areas:

Dissemination of Information on Asbestos

On March 25 Hanshin ASNET held a symposium in Kobe City on anti-asbestos measures in the damaged area by the Earthquake, which drew 200 participants. From June 30 to July 2 it operated a hot-line telephone service on asbestos problems for citizens in the Earthquaked damaged area, and received a total of 94 calls. Even after July 2, many more people and a number of reporters called the two Asbestos Networks (i.e., Hanshin ASNET and the ASNET), asking many questions: what are the concentrations of airborne asbestos in their neighborhoods, how dangerous asbestos is, whether they had better move to an uncontaminated area or not, where they can buy dust-masks, etc. Despite the repeated reassurances by the Hyogo Prefectural Government, and City Governments of Kobe, Ashiya, and Nishinomiya, and other authorities that the concentrations of asbestos in the quake-damaged area were so low, and there was nothing to be concerned about, many residents thought these official statements were untrustworthy, and consulted with the Asbestos Networks.

Works for the Implementation of Measures to Contain Asbestos Dispersion

The expenses for demolition of collapsed buildings -- with the exception of buildings owned by companies capitalized at \100 million or more -- are subsidized 97.5% by the national government and 2.5% by the local governments concerned. During February and March, the expenditure for removing sprayed asbestos was not being financed by government fund, and this led to haphazard demolition operations. Local resident's strong concern about asbestos, as manifested by the establishment of Hanshin ASNET, and the high concentrations of airborne asbestos, pushed the governments to decide to wholly subsidize asbestos removal. The City of Kobe informed the Asbestos Networks during a negotiation session on April 13, of this change in the government funding policy.

But even after this change in the government subsidization policy, many construction companies continued to demolish buildings without removing sprayed asbestos. At the end of May, the City of Kobe issued a notice to construction companies reminding them once again of their obligations to follow the Guidelines for Dealing with Asbestos Problems, which required contractors to inspect and remove sprayed asbestos before demolishing buildings. Even such a well-known general contractor as Kumagai-gumi Co. was found to have been demolishing buildings without first removing asbestos. The malpractice revealed that they make little of the danger of asbestos. The national and local governments, too, make little of the danger. Six months after the Earthquake, the City of Kobe says that it has almost completed the inspection of sprayed asbestos in collapsed/damaged buildings within the City. The Asbestos Networks have found more than 20 collapsed/damaged buildings with sprayed asbestos, and informed the City, the Labor Standards Bureau and local labor standards offices of the existence of these buildings (Fig.5). 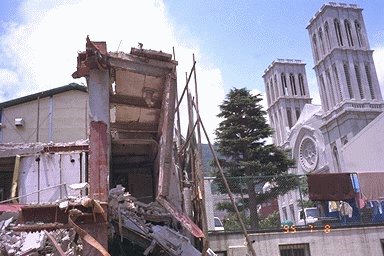 Fig.5
The Asbestos Networks found a collapsed/damaged buildings with sprayed asbestos, and informed the City and the Labor Standards Bureau.
(07/08/95)

The City of Kobe, based on its own findings and those of the Asbestos Networks, has issued orders to suspend demolition works of nine buildings which were underway without prior removal of sprayed asbestos. Although the Labor Standards Bureau and the local labor standards offices are in charge of ensuring the safety and health of workers, they are not eager to suspend haphazard demolition works, and claim that they cannot do much more than encouraging contractors to let their workers wear dust-masks.

After the Earthquake, the Ministry of Labor distributed disposable dust-masks to demolition workers. Although the Environmental Agency distributed gauze-masks and masks for pollen allergy to primary schoolchildren and junior high school students, these masks are inadequate to prevent asbestos inhalation. Mari Christine, a famous TV personality and member of the ASNET with her concern about asbestos problems based on her own experience, proposed to the ASNET that it should launch a campaign to spread words about the danger of asbestos among the residents of the quake-affected area, and to distribute masks among the earthquake victims, especially children. In March, the ASNET launched a Project for Supplying Masks to Earthquake Victims, and started raising fund to buy masks. The Project, in collaboration with volunteer groups in Kobe, has already distributed some 47,000 masks for children and 19,000 masks for adults (Fig.6). 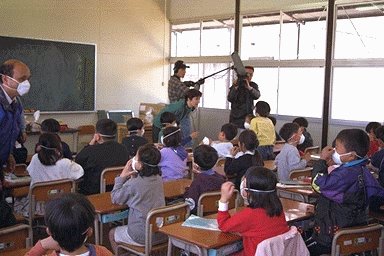 Fig.6
Second grade schoolchildren are listening to Mari Christine as she demonstrates how to use dust-masks.
(04/13/95)

On March 7, the ASNET sent an appeal to various anti-asbestos groups abroad, asking for their support to the mask-distribution project. In response to the appeal, a number of international groups took actions in support of the Earthquake victims. For instance, the Asbestos Diseases Society of Australia rushed us 42 dust respirators and 50 disposable dust masks; it also sent a letter to Prime Minister Murayama, expressing a deep concern about the asbestos problems in the earthquake-affected area, and soliciting his prompt action to implement proper measures to prevent the victims from exposure to the deadly material. Asbestos Victims Special Fund Trust in the United States, Medicina Democratica in Italy, and Ban Asbestos Group in Brazil sent similar letters to the Japanese Government, and the City Governments of Kobe, Nishinomiya, etc. 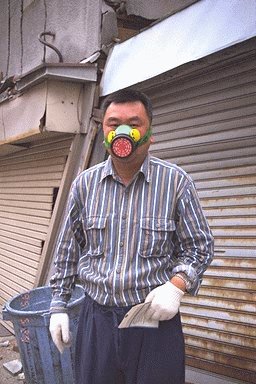 Fig.7
Workers in demolition sites, who were delighted to receive the respirators, thanking the Australian group's generosity.
(05/29/95)

Very grateful for these solidarity actions, we brought the respirators we received from Australia to the Hyogo Labor Standards Bureau in Kobe, and asked it to distribute the masks among demolition workers in the city. But Ministry of Labor officials there refused to comply with our request on the grounds that these respirators had not won official government authorization as dust respirators. We strongly protested the officials' stubborn attitude, and distributed the masks among workers in demolition sites, who were delighted to receive the respirators, thanking the Australian group's generosity (Fig.7). But some demolition workers refused to receive the respirators, telling us that although their employer had already provided them with respirators, they found it so troublesome to wear them while working that they decided not to wear them. Obviously, even when some construction companies supply their workers with masks, they seem to be failing to tell the workers about the danger of asbestos and encourage them to protect their own health.

From February to May, between 5 and 10% of the people in the Earthquaked damaged area were estimated to have been wearing dust-masks/pollen allergy masks. Since the beginning of June, however, the percentage of people wearing masks has dropped to around 1%. One important factor underlying this drop seems to be the significant decrease in media coverage of the high concentrations of airborne asbestos.

Although the Environmental Agency continues to announce its counts of airborne asbestos fibers on a monthly basis (Fig.4), the media think these monthly announcements wouldn't make news, compared, especially, with the news reports on the doomsday cult with its poison gasses. Moreover, the fact that the demolition and removal of collapsed wooden houses is coming close to an end, coupled with the onset of the rainy season in Japan in early June, has obviously decreased the amount of visible dust in the air. Nonetheless, the concentrations of airborne asbestos fibers, though not visible to naked eyes, remain dangerously high. The geometric average concentrations of airborne asbestos in the quake-affected area published by the Environmental Agency were 0.9 in April and 0.8 in May (from May 29 to June 2).