Concentration of Asbestos Fibers in Kobe is 2,500 Times as High as in Tokyo

Early in the morning of January 17, 1995, people in the Hanshin Area and the Awajishima (Awaji Island) were suddenly waked by the Hanshin-Awaji Great Earthquake of magnitude 7.2. More than 6,000 people were killed, more than 170,000 buildings collapsed or damaged, and more than 179,000 buildings burned (Fig.1). Here and there asbestos-containing building materials were broken down, and sprayed asbestos fibers were torn off. Asbestos fibers sprayed on steel frames were exposed naked in the sea of debris. For example, on February 7, Hikosaburo Yoda, a Research Associate at the University of Tokyo's Faculty of Engineering and one of the coordinators for the ASNET, saw a crushed condominium named Sanko Mansion in Higashi-Nada Ward, Kobe City. Steel frames sprayed with blue asbestos were laid atop the lumps of rubble blocking the sidewalk (Fig.2), and lumps of sprayed asbestos were scattered on the debris.

Many members of the rescue teams might have been exposed to asbestos when they took off the steel frames clad with sprayed asbestos. Data on the concentrations of asbestos in the air of the quake-damaged area before and immediately after the Earthquake are nowhere to be found. It is highly plausible to assume that the degree of exposure to asbestos caused by careless demolition of buildings must have been far more serious than that caused by the collapse of the buildings by the Earthquake.

Several days after the Earthquake, collapsed/damaged buildings began to be demolished. Most of the demolition work was carried out without spraying water (mainly because of the shortage of water supply), enclosing the buildings with sheets, letting the workers wear dust-masks, and needless to say, without removing asbestos. People were unaware of the danger of asbestos, and wanted to have the collapsed/damaged buildings -- the reminder of the disaster -- taken apart and removed, quickly. General contractors were eager to demolish the buildings of their own erection promptly, so as to do away with many pieces of evidence which could prove that they had cut many corners when they built them years ago. In fact, it was reported that a building constructed by a leading constructor had empty beverage cans buried into some of its concrete pillars, was using a far less amount of reinforcing steel than required by the national regulations, and its reinforcing steel bars were deviated significantly from the center of the concrete pillars.

Toward the end of January, high concentrations of dust in Kobe began to be reported by newspapers and TVs, and the Environmental Agency decided to measure airborne asbestos fibers in the damaged area. On February 2, the Hyogo Prefectural Government issued an instruction to the local association of construction companies demanding that they should spray water, enclose the demolition sites with sheets, and remove sprayed asbestos before carrying out the demolition operations. But at the end of the instruction, one important qualification was added to nullify the entire instruction: "In case life is in danger, there is no need to observe the law." The construction companies took the instruction as authorizing them to demolish buildings without removing asbestos, spraying water, enclosing the sites by sheets, and without letting their workers wear dust-masks. The Earthquake-damaged area was turned into a lawless land.

After a report on the horrible situation of the Sanko Mansion sprayed with blue asbestos was made public, the Environmental Agency directed the City of Kobe to demolish it with proper asbestos-handling measures. However, the police hurried its owner to take the rubble off the sidewalk. The owner in turn contracted a small construction company to demolish his condominium, as the city authority wasted its time trying to decide which asbestos removal company it should hire. On February 17, we found the condominium in the process of being demolished (Fig.3). 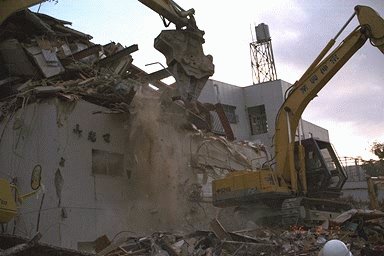 Fig.3
Demolition of the condominium with sprayed blue asbestos.
(02/17/95)

Steel frames with sprayed blue asbestos were cut into shorter pieces by a shearer of the demolition machine, shaken and dropped on the debris to strip the frames clear of the asbestos fibers (scrap iron dealers would refuse to buy steel frames if the sprayed asbestos are left unremoved from their surfaces). Although the contractor's foreman knew that the steel frames were sprayed with asbestos and was wearing a disposable dust mask himself, he provided no masks to more than ten subcontracted workers, in sheer violation of the Law of Safety and Health of Labor. No water was being sprayed and the subcontracted workers, not wearing masks, swept lumps of blue asbestos scraped down. The demolition site was not closed off by sheets. Just beside the demolition site, people walked by with no masks and residents of the condominium, also with no masks, were watching the work in the hope of recovering some of their valuable belongings buried in the debris. It was a terrible and awful sight -- and a typical example of the demolition sites throughout the area at the time.

Concentration of Asbestos Fibers in Kobe is 2,500 Times as High as in Tokyo

There was nothing we could do to stop the illegal demolition work, because at that time Kobe was out of law. The only things we could do were to distribute disposable dust masks to subcontracted workers and residents of the condominium, inform the Ministry of Labor's Hyogo Labor Standards Bureau of the deplorable situation, suggest the passers-by that they had better keep away from the demolition site, and take the measurement of airborne asbestos fibers near the site. Workers and residents gladly wore the masks we distributed. We demanded of the Labor Standards Bureau that it should discipline construction companies into observing the Law of Safety and Health of Labor, by presenting the results of the counting of the number of airborne asbestos fibers undertaken by Shigeharu Nakachi near the demolition site of the Sanko Mansion which showed 160 to 250 asbestos fibers* per liter of the air sampled at the place where people were passing by.

*In Japan, airborne asbestos fibers mean those fibers which can be seen through a phase contrast microscope but not through a biological microscope, and is 5 microns or more in length and 3 or more in aspect ratio, or the ratio of length to thickness.

The asbestos concentration in downtown Tokyo is about 0.1 fiber per liter of air, which means that people walking near the demolition site in Kobe mentioned above were exposed to the density of airborne asbestos fibers 2,500 times as high as that in Tokyo. The counts of asbestos fibers done by us were reported by newspapers and TVs. Two days later, the Environmental Agency published its own counts in February (Fig.4).

The geometric average concentration of asbestos fibers in the air measured at 17 locations of the quake-affected area was 1.0 fiber per liter (10 times as high as that in Tokyo); 4.9 fibers per liter of air were counted outside of the Chuo Ward Office, and 4.8 fibers near the Nishinomiya City Hall, and as many as 11.2 fibers near a demolition site in Chuo Ward.

The Environmental Agency was so surprised by these high counts that it called an Inter-Ministerial Conference for Dealing with Asbestos Problems. The eight ministries and agencies present at the meeting agreed that sprayed asbestos be properly removed before demolition of their buildings in the quake-damaged area, and issued a memorandum instructing construction companies to observe the Law of Safety and Health of Labor. The City of Kobe also asked construction companies to inspect whether any buildings to be demolished have sprayed asbestos or not, and to report the results of inspection to the City before they start demolishing the building.

However, most of the construction companies refused to follow the instruction of the Inter-Ministerial Conference and that of Kobe City. By the middle of April, only about 100 reports had been filed with the City, while the number of buildings that had actually been demolished was several times as many. The counts of airborne asbestos fibers measured by the Environmental Agency in March did not show any significant decrease from those of February; the geometric average of asbestos concentration at 17 locations was 1.2; and the air near the Nishinomiya City Hall was found to contain as many as 6 fibers per liter.